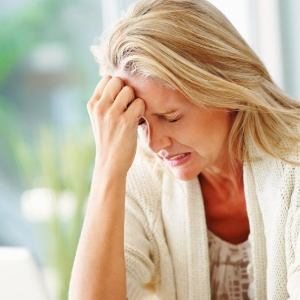 Menopause is a stage in the life of the woman disappears in the period and menstruation, which entails significant hormonal alterations.

The last menstrual period and the onset of menopause usually occur in the period between 45 and 55 years of age. This leads to loss of ovulation, a decreased secretion of estrogen and progesterone and leaving the reproductive capacity of women.

The onset of menopause is often accompanied by characteristic clinical signs and symptoms, such as hot flushes and sweating (which usually last from one to five years), dizziness, palpitations, vaginal dryness (which leads to discomfort during sexual intercourse), fatigue, irritability, restlessness or anxiety.

Menopause may also be accompanied by a decrease of calcium in bones with decreased mineralization of the same, a condition called osteoporosis. This can lead to bone pain and pathologic bone fractures, i.e. fractures movements or activities normally not lead to a bone lesion.

In menopausal women also increases the incidence of cardiovascular disorders, due, among other factors, to reduce estrogen levels.

The menopause treatment is to relieve the symptoms described above and prevent complications. Hormone replacement therapy is offset by the external supply of hormones, natural hormone decline that occurs during menopause.

Estrogen provided artificially may be given by mouth, in the form of patches in the skin or vaginal creams. Estrogens may be administered alone or with progesterone.

Hormone replacement therapy can also cause side effects and increase the risk of certain types of long-term cancer in certain women; therefore, the decision to use should be assessed by the physician in conjunction with the woman entering this phase of her life.

There is the possibility of using natural phytoestrogens in treating menopause. It is a matter of natural products obtained from the similar effective plants to the natural estrogens of the woman.

These include isoflavones, which can be obtained from various plants such as soybeans.

They have an anticancer effect, reduce cardiovascular risk in women increased from menopause and relieve the symptoms of this period, such as hot flashes.

In the same way, it is necessary to treat also, in cases in which it is so indicated, the osteoporosis that could appear, to avoid its complications.