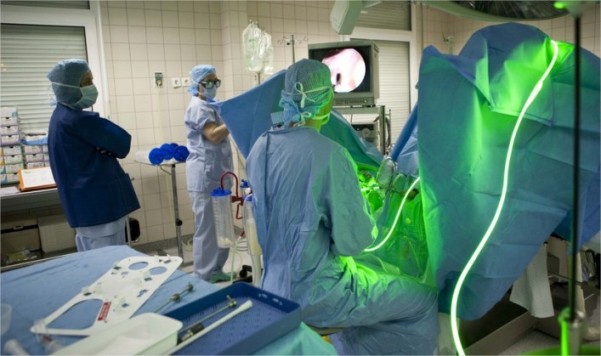 The green laser is a fast, clean and safe for the treatment of various pathologies proctological.

Developed 25 years ago at the Mayo Clinic in the United States, the green laser has been improving its technology for application purposes in the treatment of benign prostatic hyperplasia. It is a ray of light with a length of 532 nm (nanometer) that produces the green light that vaporizes the tissue with a vascularized surface (if the tissue does not have blood, the laser does not work). By vaporizing the tissue that compresses the urethra increases the urinary flow, the discomfort caused by the prostatic enlargement disappears.

It makes the caveat that this technique does not apply in cancers or fibrotic tissues because it do not have vascularization. Only applies to benign prostatic hyperplasia, ie the benign growth of the prostate that has nothing to do with cancers.

Green laser for hemorrhoids and fissures

The green laser based treatment uses a laser light which vaporizes tissue and photocoagulation. The green laser has revolutionized the treatment of hemorrhoids and fissures. This is just a clean technology that damages blood vessels or nerves in the treated area, preventing bleeding and promoting rapid recovery.

Thanks to the green laser the post-operative pain is almost nonexistent. The results are almost immediate and many patients return to normal activity within 2 to 3 days of the operation.

Green laser for the treatment of benign prostatic hyperplasia

BPH or benign prostatic hyperplasia is the benign growth of the prostate transition zone, which is the part of the prostate that surrounds the urethra. This growth leads to this duct becoming progressively blocked over time, resulting in a set of symptoms and signs called under obstructive uropathy.

The obstructive uropathy is characterized by difficulty in urinating, weak and thin voiding stream, need to make force to urinate, increase of the frequency of urinary and nocturia, urinary urgency (imperious desire to urinate and little controllable), drip at the end of urination, etc. Complications from obstructive uropathy may also occur, such as urinary tract infection, blood in the urine, bladder stones, urinary retention, and impaired renal function. To alleviate these symptoms and prevent the onset of complications, there are a number of therapeutic alternatives; among them is surgery, which is the definitive treatment and with the best long-term results. Among the surgical options are open surgery (with incision) and endoscopic surgery (through the urethra).

The technique of photoselective vaporization of the prostate with the “green laser” or KTP laser (potassium-titanyl-phosphate laser) is different from the other lasers used in BPH. This laser has a wavelength of 532 nm (less than the Nd: YAG laser) and emits a visible green light, which is strongly absorbed by hemoglobin and not by water. The energy of the KTP laser penetrates only 8 mm in the prostatic tissue, therefore, the heat is concentrated in a small volume of superficial tissue, which leads to it vaporizing immediately.

It is a technique or endoscopic surgery, where thanks to laser energy, the prostatic tissue that obstructs the duct vaporizes (disappears), leaving a wide duct, through which urine flows without difficulty. The bleeding from this surgery is minimal or nil, in which it differs significantly from the usual surgeries.

Recovery is also different from the other techniques. The patient is hospitalized, in general, one day. The day after your surgery, the catheter is removed and the patient urinates spontaneously, giving birth early. The reintegration into work usually occurs within a few days, without major problems.

The incidence of complications derived from the green laser is considerably lower than with other surgeries for BPH, and in general, easy resolution and not serious.

What to do to take care of the prostate

Before listing what should be eaten to keep the prostate in good condition it is good to know what should be avoided, such as saturated fats, which have a very significant impact on the prostate, red meat, milk, cheese and yogurt, cakes and also alcohol. There are several beneficial foods for the prostate: the onion, in particular, is an excellent anticarcinogenic, and not only for the prostate. All foods rich in saponins are also recommended to prevent the appearance of cancer.

Saponins bind to toxic molecules or cholesterol and are eliminated by natural means. The foods rich in saponin are: vegetables in general and soy in particular, peas, spinach, asparagus, tomatoes, potatoes, garlic, green tea, ginseng and chestnuts. Among the beneficial foods to improve the health of the prostate is the tomato, thanks to lycopene, a very effective antioxidant. There have been studies in which it has been shown that the consumption of tomatoes produced 45% less cancer than in those who did not.