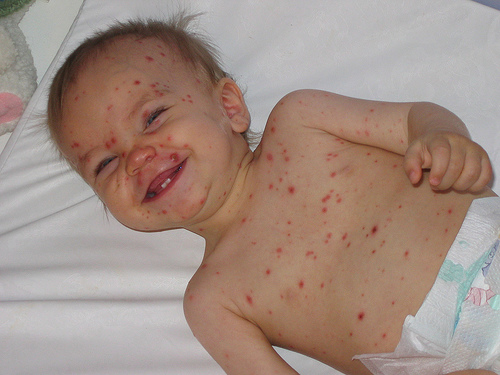 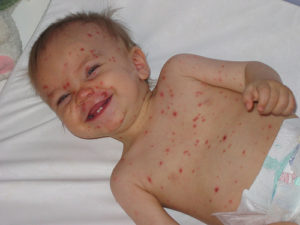 In general, chicken pox is not harmful to unborn. A woman becomes infected when less than 16 weeks pregnant then there are however likely to abnormalities in the baby. Even if a woman is pregnant and get chickenpox are the dangers to the baby grows. They will do well to treatment as soon as the doctor visit.

Pathogen
Chickenpox is caused by a virus, varicella zoster virus.

Way of infecting
The varicella zoster virus is located in the throat and nose of an infected child. The virus is spread among others by coughing, sneezing and talking. The moisture that comes from the vesicles is very contagious. The blisters once dried up than the risk of infection is gone. The contagiousness of the disease starts 1 day prior to the onset of the spots.

Course of the disease
A child who received the varicella zoster virus has accumulated will first experience a slight fever. The temperature rises to about 39 degrees. The child may suffer from listlessness. After 1 to 2 days creates pink patches on the forehead and behind the ears. These spots expand into the trunk. They are slightly above the skin. The spots turn into blisters. These blisters can be very itchy. By the itch scratches a child they usually open, but they can also jump naturally open. When the blisters are concerned they will undoubtedly open for subsequent scars. Besides are the wounds sensitive for infections.

Dry the blisters in within a few days. There are scabs on the skin. When the scabs fall off the disease is gone. This is about 9 to 13 days after the outbreak of the disease. The overall disease process usually takes about 2 to 3 weeks.

Treatment / care
There is no specific curative treatment for chickenpox. A child should be out sick. However, measures can be taken to the child as comfortable as possible. Use menthol powder on the skin to relieve itching. It may be that the child has sores in the mouth. This hurt instead of that they itch. Give the child soft foods and popsicles to this pain. It is wise to the child’s nails short to cut. He may be less than scratching the blisters.