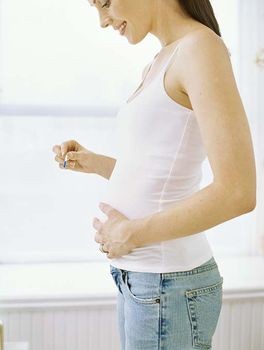 This stage of your little one is especially exciting must follow the pregnancy week by week, because his heart has independently developed and may soon begin to beat. Important members such as blood vessels, the spine, the digestive and brain are also now being developed, spine, digestive system and brain. 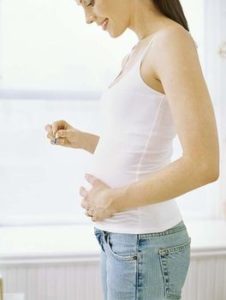 Baby development
This is a very important moment for your child. In the fifth week the embryo has developed between 0.5 to 1 millimeter in a small oval plate. Now it seems rather like a small flying saucer from another world. It consists of three embryonic germ layers or (ectoderm, mesoderm, endoderm), from which the various organs develop.

The external germinal layer cells to form the developing nervous system, sensory system and skin. The mesoderm (embryonic layer media) develops the heart, vascular system and connective tissue (CT). Endoderm layer (innermost embryonic tissue) develop internal organs as the intestines, lungs and reproductive system. In the middle of the inside of the embryo, there is a slight thickening, a neuronal line that later will develop your child’s nervous system.

From the front of the embryonic disc develops the head and the back the rest of the body. The heart of your little one has not yet begun to beat. Many important parts are being developed. The torso, head and limbs may already appreciate. The brain and spine begin to take shape and the gastrointestinal tract. In addition, muscles, blood vessels and the soft bones of the baby start to emerge now.

Your body
In the fifth week of pregnancy was first shown by the absence of menstruation. With a regular cycle of 28 days this week, the period is absent. A pregnancy test from the pharmacy can confirm you, these days after the absence of menstruation, if you are pregnant or not. You can even have the initial feelings of tightness in the chest. Your breasts look firmer, larger or even in tension. Your nipples may also be more sensitive to touch. For the release of the hormones progesterone, estrogen and prolactin increases the glandular breast tissue, while fat and connective tissue recedes.

In the fifth week the uterus has not grown, or but little, and still can not feel anything through the abdomen. Through a vaginal ultrasound uterus and can appreciate more flexible. The cervix is ​​still able to move smoothly, it will not be fixed until 16 week of pregnancy. The cervix is ​​already sealed by a mucus plug so that bacteria can not climb the vagina into the uterus. Furthermore, the vagina is different. With the increase in the hormones of pregnancy is noticeable softer and more elastic than it used to. The need for calories is through week 13 around the 2,200 calories per day. It also depends on your size, your weight and age. At this point still do not see the belly, so apparently nobody will appreciate your state.

Avoid alcohol, nicotine and self-medication
Once your period is late and you suspect you are pregnant, when in doubt and you must stop drinking alcohol, the nicotine in snuff and even prescribed medication (at least until you see a doctor) because it could cause problems for the development of your child. Your baby can not digest or filter the alcohol and nicotine, and that, for example, can lead to increased risk for allergies, hyperactivity, or poor growth even in the womb.

When is “note” pregnancy?
Since not all women immediately after the missed period can feel the physical changes that indicate a pregnancy, you may feel strange or different until several weeks later. Some women experience implantation of the fertilized egg in the uterus, light bleeding, which can be confused with menstruation. In this case maybe that don’t feel pregnant, although you are indeed.