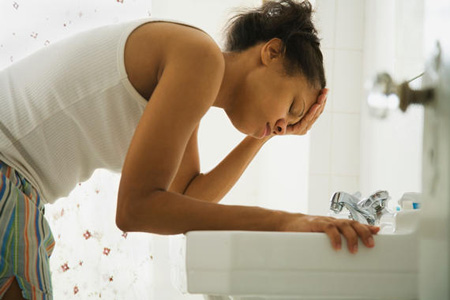 When we get pregnant our body gives us some signals. Then we tell you what, for you are careful and know to identify them.

Tenderness and swelling of the breasts
The increased hormone levels can cause bloating and breast tenderness. This sensation is similar to that experienced during the period, but more intense.

Fatigue
In the first weeks of pregnancy is very common to feel very tired and fatigued. This may have to do with the increase of the hormone progesterone.

Vaginal bleeding
It is also common after conception is a little blood in the vagina. This can occur 10 to 12 days after conception. This symptom may be related to the implantation of the fertilized egg in the uterus. The amount of blood is very small and does not last more than one or two days.

Nausea or vomiting
It is very common to have nausea and vomiting during the first 3 months of pregnancy. There are few women who feel within the first month, but it can happen. Normally in the mornings, but can also have it during the day.

Sensitivity to certain odors
It is normal in early pregnancy feel aversion to certain smells and can feel even nausea to expose you to the aroma. It can also happen with some meals that once enjoyed.

Abdominal swelling
The hormonal changes that occur in early pregnancy can cause swelling, as occurs before your period arrives. This has nothing to do with the enlargement of the uterus, but it is only a temporary bloating.

Frequent urination
It is very common after pregnancy you the passes going to the bathroom to pee. This is because during pregnancy increases the amount of fluid in the body, which means that your kidneys work harder.

Delay of menstruation
This is naturally one of the surest signs of pregnancy. However, when a woman is irregular in their cycles, a delay in the menstruation can be very normal. But if you’ve always been like clockwork and your period does not arrive over a week, get a pregnancy test. Keep in mind that not all pregnancy test pregnancy diagnosed the first or second week, so if the test comes out negative and anyway do you think that you might be pregnant, again to make the test a few days later.