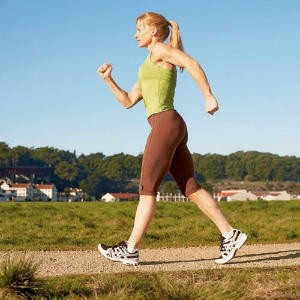 It is not only the simplest and most natural exercise, but as researchers have found, brisk walking, at least three hours a week, you may have a protective effect against stroke. One benefit that women can reduce the risk by more than 40%.

It is the recommendation that emerges from a study conducted by researchers and interesting results, confirming the beneficial effects of physical activity in the prevention of stroke. Specifically, as simple and natural as walking briskly – at least three hours a week-exercise may exert a protective shield for women. More than 33,000 people have participated in a study that explores the prevention of stroke.

Prevent stroke by doing something as natural as walking. The study not only found that moderate physical exercise is a commitment to health, but an activity as common as walking – a step light for 210 minutes or 3 hours per week – exerts a protective effect against stroke or stroke in women. Specifically, researchers found that women who met this premise were less likely than those who walked less or had a sedentary life. In addition, walking proved more beneficial than other physical; at least as regards the activities prevent strokes. Thus, the study found that women who walked had less risk of having a stroke than those who opted for biking or higher intensity exercise and in less time.

Exercise is an essential healthy habit, not only to keep in shape and take care of our weight, but to reduce the risks of developing certain diseases. These include stroke, caused by blockage of the arteries or rupture of blood vessels in the brain. Stroke is the interruption of blood supply to any part of the brain. The most common symptoms are headache, slurred speech, dizziness, double vision, weakness on one side of the body.

As noted, more than 33,000 women and men who participated in this study, who responded to a questionnaire on physical activity. Participants were classified according to gender, physical activity and time commitment per week. During the next twelve years, researchers continued analyzing and observing the participants, in which time 442 strokes were recorded. Women who, regularly, had walked up to 43% less risk of developing this type of problems of health, compared with the group that was more sedentary.

With respect to the men who participated in the study, researchers have pointed out that there was a decrease in the risk of suffering a stroke compared with women who practiced physical activity with the same regularity.