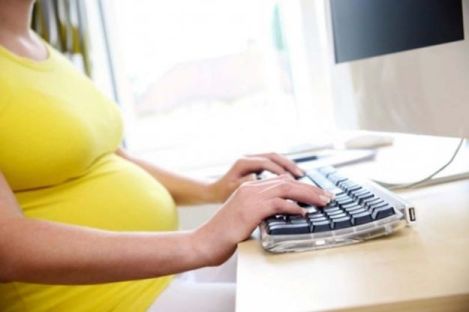 Can we work until the end of pregnancy? We can, but we should not, because as recommended by doctors and specialists work beyond the eighth month of gestation period can be as harmful to the baby as the habit of smoking during pregnancy.

There might be exaggerated comparison, but in terms of medical and health, it is not, since among other risks has found that babies of mothers who continued to work during the final stages of pregnancy are born with less weight. A similar effect to that produced by nicotine and other unhealthy substances that enter our body through the cigarette. In fact, being pregnant is one of the best arguments for quitting.

But, what about work? The work represents a logically effort further and greater physical and mental demands, so it is best to focus on pregnancy and temporarily park the job duties. Losing baby weight is not a minor issue, since it can lead to other health risks for newborns, such as diabetes. Low birth weight has also been associated with greater difficulty in school learning.

Not all jobs are equal and although more and more the women who, for various reasons (economic, family, personal …), still working on the final stages of pregnancy, as recommended, according to doctors and specialists, we pick the sick leave between the sixth and eighth month of pregnancy, focusing on the future motherhood in the final stretch of the gestation period. The age of the mother influences, because higher age more risks that the baby is born with low birth weight.

Before making a decision, you should consult your doctor to assess if your job (level of stress, working hours, physical effort to perform, among other factors) can be compatible with the emotional and physical changes that your body will start experiment until the final stages of pregnancy, a stage that is common to feel tired more quickly. In short, if the pace of your work activity poses no risk to the baby during the last weeks of gestation.

Pregnancy: Occupational hazards
Depending on where and how you work, we can be more or less exposed to certain factors, physical and environmental, some of which we can be more vulnerable during pregnancy, because we are talking about the health of two, mother and baby, so it is always advisable to be more cautious. Physical factors such as excess noise, sudden changes in temperature or staying too long in a same position, to which you can add the psychosocial (work by shift, excessive workload or excessive slipping) and chemicals (work by manipulating chemicals).