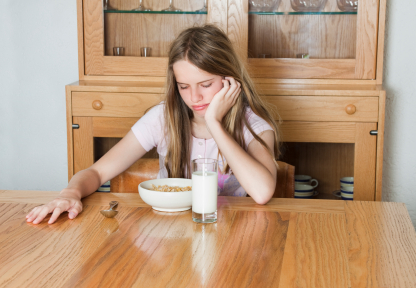 It is a common problem among patients diagnosed with Alzheimer’s disease characterized by the deterioration of intellectual functions, primarily memory, but can also be affected other areas such as language, the ability to make decisions or carry out everyday tasks, attention, changes in mood, behavior and personality. In this case, we will focus on a specific disorder associated the eating behavior. How can we help to prevent it?

The problems of eating behavior in patients diagnosed with Alzheimer’s disease may be due by overfeeding or malnutrition, through rejection of food behaviors, difficulties in swallowing or play with food.

We can not forget that we are in patients with memory problems and guidance, so their habits and how they behave at mealtime can be see disrupted, come to forget in a given phase of the illness if eaten or how successfully use cutlery. It’s a direct consequence of the disease, the same way you can also have sleep disorders or depression. The diet should be balanced and adapted to their needs.

In addition, specialists provide a number of recommendations to help prevent feeding problems. Tips like:

Can Alzheimer’s disease be prevented?
Alzheimer’s disease remains unknown in many respects. A disease that evolves by stages and that vary widely from one patient to another. Thus, in the initial phase is characterized by loss of memory for recent events, difficulty retaining new information or changes and alterations of humor. At this stage the patient may live independently, even though some of its capabilities (thought or frameworks) are affected. Studies and research has indicated that the fact of staying active with hobbies that involve mental stimulation, can help prevent the disease but, yes to retard its effects. In other words, increased physical and mental activity helps slow the progression of Alzheimer’s disease, but does not rule out the fact of suffering.