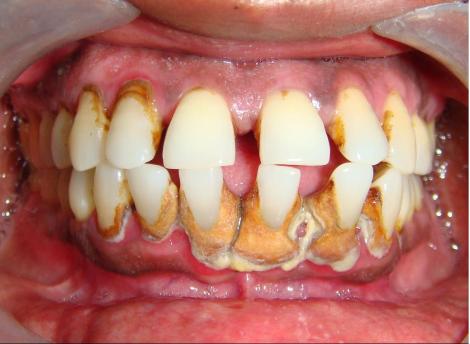 What is periodontal disease or periodontitis?

Bleeding and inflammation of the gums is a problem that can be serious. The processes that affect our mouths are many and varied, and these can affect other organs or systems of our body that apparently have nothing to do with them.

One of the most topical for its incidence in the population in general, a process that affecting the gums and bone elements of fastening of the teeth can cause us to lose our teeth and even affect other organs of our body as just related.

Periodontitis is inflammation of the gums, as principal and leading sign, following the onset of bleeding when we brush our teeth or spontaneously with chewing, and arriving at more advanced stages of the process and even cause the collapse mobility of teeth.

Why does periodontal occur?

Many people suffer from this type of process but keep a system of living and proper dental and oral hygiene, while others, with more disordered habits and hygiene, fail to develop.

Such apparent paradox has made thought and research specialists, considering the possibility that there may be a genetic factor predisposing to do that people who have this genetic trait tended to suffer from this disease.

Indeed, researchers from the universities of San Antonio (USA) and Sheffield (UK) have discovered a gene that predisposes to those who have it, to develop in certain cases, periodontal disease, while those who do not have this gene develop the process.

Of course, although there is a genetic predisposition to type, poor oral hygiene and a wrong lifestyle habits, accelerate the onset of symptoms to worsen and aggravate the development of the disease.

How do you reach this situation?

Two of the elements to be considered in our mouth, are the teeth and gums, which although not the only existing within the oral cavity, are the most exposed to potential attacks.

Gums at its junction with the teeth, are continually subjected to the aggression of the bacteria found in dental plaque, in addition to the mechanical stresses that occur in the act of chewing.

Furthermore, at the junction of the gum with teeth, the accumulation of food debris that after hours, suffers decomposition and fermentation occurs in this place, producing a local chemical reaction, which by itself is irritating to gum.

There in the mouth, some natural defenses involved in the fight against bacterial infection through the production of a substance called free radicals, which are electrically charged chemicals, and other substances need to join to act, addressing of initial form to cancel to the bacterial agents.

On the other hand, the body has mechanisms to compensate for the excess free radicals, although, these mechanisms may not be sufficient in this work for various reasons, such as:

How can suspect that I have periodontal disease?

To not be able to occur the neutralization, by the body, existing in the mouth in excess free radicals, they act on the gums, causing inflammation and altering them thereof, a process known as gingivitis, which if not controlled, you can get to become chronic and develop into periodontal disease.

The symptoms that this type of process is present, and thus the most frequent and immediate consequences are:

Being a chronic process, the main cause is infectious type, due to germs that accumulating and turning into a cyst in the gingival pockets (area between the gum and tooth), maintain and exacerbate the inflammatory process, weaken the structure around the tooth (periodontium) and may even destroy some of the existing bone in the area of dental insertion.

Besides this, there are substances and habits that worsen the process and significantly increase its possible deterioration. Thus, taking food or drink excessively hot, alcohol and especially the snuff among others, are elements, the latter for its vasoconstrictor effect (reduced blood supply) on the gums, which worsen the prognosis of this process.

What if we do not treat this process?

As mentioned, this oral disease is a chronic and infectious cause process, so, of not treating process specifically and also keep factors or habits that worsen their performance and prospects, the only thing we can also expect a end of trouble and inconvenience, the loss of teeth.

If disease is a genetic predisposition, is there an effective treatment?

The treatment is relatively simple. Using a scraping technique called curettage, the dentist removes pockets of germs that have occurred in the periodontal region (between the tooth and gum), while the process is moving not to take other preventative and maintenance actions.

You can perform surgical reconstruction of the soft tissues of the gums, which are performed on an outpatient basis by the periodontist dentist (a specialist who is dedicated to treating this type of process), without discomfort to the patient, as well as reconstruction of the affected bone to ensure as far as possible and, depending on the evolution of the disease state, maintenance of teeth in their sockets.

Treatment must be individualized for each patient and their characteristics and phases depend on the status of their disease evolution are, and must be performed by a specialist and not by any dentist.

But perhaps the most important and effective prevention is, in this case, and although there is a genetic predisposition, may also be performed.

Given genetic predisposition seems to prevail in this process, although the person concerned has received the application of a correction technique, it could be re-infected or disease continues its chronic course.

A good hygiene of teeth and gums, which is made a correct cleaning of these structures and the elimination of food waste, is very important, as it is, the use of conical toothbrushes and the silk thread to clean the holes or gaps between teeth and others, and in which, debris that favor the maintenance and/or creation of the infectious process are already explained.

The fluoride toothpastes and vitamin E can help prevent periodontitis, due to the characteristics of its specific action on bacteria, for their contribution of mineral fluoride to the tooth, to produce neutralizing free radicals, as well as when its antioxidant effect is associated with vitamin E.

But the only ways to control the process, if it exists, or to prevent their occurrence is regularly see a dentist. He is the specialist who can help us maintain our healthy mouth!