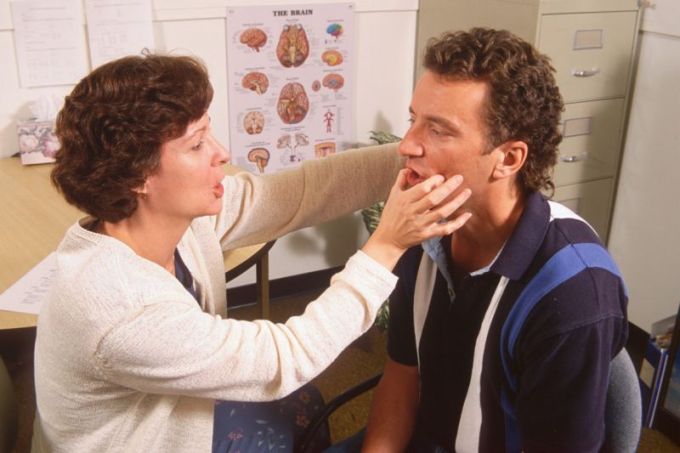 Apraxia of Speech (AOS) has been defined as an alteration of the programming speech with difficulty initiating speech, slow articulation and varying distortion of phonemes.

In other words, people with Apraxia of Speech can know exactly what they want to say, but at the time of pronouncing they do not remember how they should put the orofacial organs into operation in order to emit each sound that composes it.

It is a complex problem and, although there may be people with pure apraxia of speech, in most cases this pathology is accompanied by aphasia.

It is an acquired disorder of neurological origin that results from a lesion in the left hemisphere. More specifically, it seems to be the result of an injury in the third frontal convolution of the dominant hemisphere, in the region of Broca’s area.

It can coexist with oral apraxia, difficulty in performing oral movements by order and imitation; dysarthria, speech impairment due to difficulty mobilizing the fonoarticulatory organs and/or aphasia, language disorder. However, apraxia of speech cannot be explained by any of these alterations.

The most common cause is vascular etiology (stroke, cerebral aneurysm, cerebral infarction, cerebral hemorrhages), but apraxia of speech can also be caused by:

Likewise, it can be a symptom in neurodegenerative diseases such as corticobasal degeneration or progressive supranuclear palsy.

In some cases, it is the only sign, or the most prominent, of a neurodegenerative picture. In these cases, the term used is primary progressive apraxia of speech.

Speech, in apraxic patients, is altered in three aspects mainly:

In higher degrees of severity in apraxia, speech may be characterized by presenting:

There are different tests that help us to evaluate apraxia of speech and establish a diagnosis.

Diagnosis is important, on the one hand, to differentiate it from other conditions that affect communication and, on the other, to establish an adequate approach from the therapeutic point of view, since the treatment is very different from that applied in a dysarthria or in aphasia.

The objectives of the treatment are established according to the degree of severity of the apraxia in each patient. In optimal conditions, in which the prognosis is favorable, the main objective is:

The main objectives of the rehabilitation are:

There are different strategies to treat patients with apraxia of speech being the most used collision of the joint. For severe apraxia, alternative or augmentative communication techniques may be necessary. The patient’s family plays an important role in the treatment of apraxia of speech.