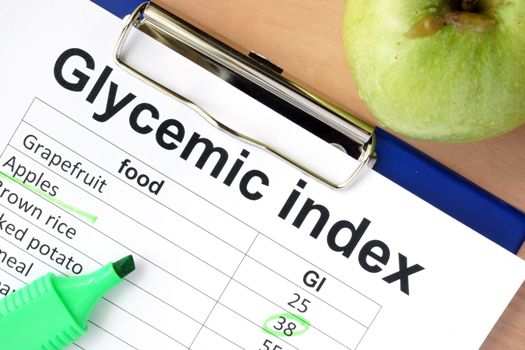 The glycemic index is a theoretical concept that guides us on the speed with which a food increases glycemia, i.e. the glucose in blood and popularly known as sugar in blood. Let us remember that glucose is going to get through food intake. Carbohydrates are the nutrient that greater effect causes on the glycemia. In contrast, proteins and fats have less of an impact on the glycemia.

To settle this index compares the food with a pattern, glucose, to which it gives the value of 100. Those foods with values above 70 are considered high glycemic index. These foods would cause a rapid and short rise in blood sugar.

And in the lowest stripes, these are below 55 and thereby cause an increase in the slow but sustained glycemia.

The glycemic index to be practice may be affected by different factors. Increase the absorption rate of carbohydrates:

And conversely, decrease the rate of absorption:

So, what determines the rise of blood sugar?
Since not only of the glycemic index but of its combination with the carbohydrate content of the food. It is what is known as glycemic load.

The glycemic load of a food is considered a value that the rate at which blood glucose comes along with the amount of carbohydrates that contains a usual portion of consumption. That is, it gives us a better forecast of the effect of food on blood sugar, as we consume.

Thus, for example, watermelon has a high GI; the fact that contains few carbohydrates per serving makes their glycemic load actually be low.

Higher values are considered those who are above 20, such as raisins, pasta or sugary cereals. These have an average glycemic load, honey, bread or boiled potato. And a low value, less than 10, pineapple, high fiber cereals, kiwi or lentils.