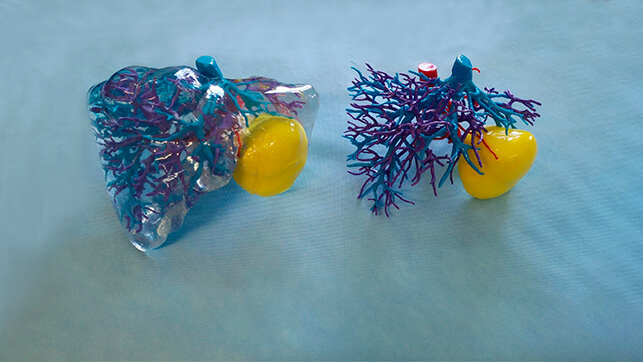 It could be a science fiction movie or a time travel into the future, but it is not. It is now possible to operate diseased livers from virtual models in three dimensions. And without needing to open the patient to see what the doctor is going to find. Since last October, The Infanta Elena University Hospital (Valdemoro) has launched this innovative program of virtual hepatic laparoscopic surgery that consists of generating three-dimensional physical models that accurately reproduce the patient’s anatomy and in which the patient can be simulated. Surgical intervention before carrying it out. In simpler words: the damaged organ – the liver – is recreated in a 3D model with which doctors work before the operation.

“The liver is an opaque treetop, and the tumors that are inside we are not able to see them if we do not touch them. The virtual liver allows us to navigate inside the patient’s liver without having to intervene,” explains Dr. Santos Jiménez de los Galanes.

To perform this technique, physicians practice several tests before the patient such as ultrasound, scanners or magnetic resonance. All the data that comes out of these images are entered into a software that reproduces a three-dimensional image of the organ. On the computer screen, the doctors work with the same surgical gestures that they will then carry out during the surgery. “And that same reconstruction allows us to export it to a 3D printer to print the liver. Then we practiced the surgery on the organ that we printed before arriving at the operating room,” adds the doctor, carrying out simulations of resections in order to evaluate the different options of surgical treatment and, depending on the conclusions obtained after this simulation, establish the surgical strategy.

Thus, by the time the patient is going to be operated on, the doctors already know perfectly what they have to attack and remove. “We entered with much more information than we usually have, because when we are going to do surgery we only have two-dimensional image tests, and these have nothing to do with what we find afterwards. With the 3D technique we get the surgery to be faster and safer,” says the specialist.

The benefits of this technique are quite evident for both doctors and patients. First, a surgical strategy adapted to the peculiarities of each patient is established in a personalized way, since each liver is different. But also, as Jimenez de los Galanes states, the patient’s safety is increased, since “we eliminate the margin of error, and also allows us to access laparoscopic surgery for patients with tumors that could not be accessed by laparoscopy”.

Another benefit is the emotional one. “The 3D liver shown to the patient before surgery and so he knows what is happening to him and what we are going to do to him. It is very beneficial because the anxiety that the patient has before the intervention is reduced, since he understands what that liver will be like after surgery,” says the doctor.

Not only this technique favors the time of surgery, but also gives good results later, as occurs with the hospital stay. “It reduces a lot, and the patient can incorporate earlier to his normal life. In fact, the time they spend in the hospital goes from twelve days, with a normal intervention, to five, with an intervention with the 3D technique. And the oncological results are the same as in open surgery, but the postoperative complications are reduced because the uncertainties are much lower,” says Jimenez de los Galanes. Also, according to the doctor, “the incisions are smaller, so the patient will feel less pain”.

On the other hand, this type of technology allows going a step further in the treatment of liver tumors, increasing the number of malignant lesions that can be surgically removed. For now, this technique is being used with patients who have primary liver tumors or metastases from colon cancers. But as the specialist points out, he has also started working with patients with pancreatic cancer.

This is because they are organs with vascular structures – veins and others – very determined and complicated. “If it were not for this virtual program, 40% of laparoscopic surgeries could not be done, because we do not know what we are going to find and what we will be able to work with. But 90% of these operations and do it like that”, confirms Jimenez de los Galanes.